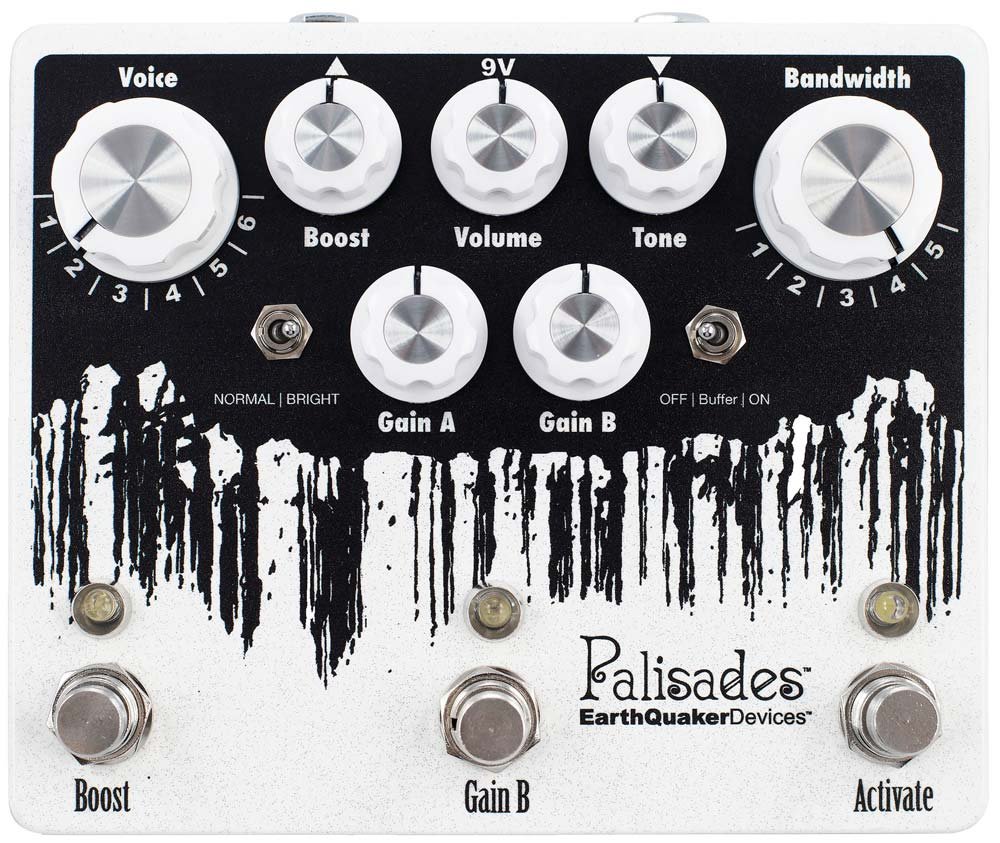 Hey buster! Welcome to your new EarthQuaker Devices Palisades™ Overdrive! The Palisades is something we said we would never do… an overdrive based on the legendary TS808! Gasp! The horror! Another tubes creamer?? In 2014?? Really?? After loads of requests we finally buckled. We ran tests with every popular clone on the market as well as several vintage originals, compared, contrasted and took loads of notes. It was exhausting but informative. In the end, we threw it all away, used our ears and came up with what we feel is the most versatile relative of the 808 available today.

With 6 different clipping voices, 5 bandwidth settings and 2 gain channels you will be hard-pressed to not find a setting that will wipe every mid-boosting overdrive off your board. The clipping voices determine how transparent and open or tight and crunchy the distortion is. They will vary drastically depending on where the gain is set, what channel is active and how much bandwidth is being used. The bandwidth sets the frequency response of the distortion and goes from thin, light and clean through fat heavy and crunchy. It may very well be the single most important control the palisades has and what really sets it apart.

Gain A is a lower gain channel with a wider range of grit that is great for strumming open chords. Gain B is a higher gain channel with a tighter range that is great for palm muting and/or shredding solos. The Palisades also has a foot switchable volume boost with adjustable level to take it over the top when you want to throw your foot up on the monitor and rip your sweet leads… or maybe just push the front end of you amp a little harder. Not enough? How about a normal/bright switch to mix and match the overall tone to different amps and guitars. Still not enough? OK then, how about a buffer on/off switch to tighten up the tone and make it sparkle when set to “ON” or warm it up and make it sag when set to “OFF”.

The Palisades is a versatile dude that will give you years of loving companionship. Each Palisades is hand made one at a time in the tiny tree house community of Akron, Ohio.

Buffer: Turns the input buffer on or off. ON is a tighter and brighter tone while OFF is a warmer tone with more sag. The buffer is part of the drive circuit & is only available when the Palisades is activated.

This device features Flexi-Switch™ Technology on the Gain and Boost switches! This relay-based, true bypass switching style allows you to simultaneously use momentary and latching style switching.

Since the switching is relay-based, it requires power to pass signal.

The Palisades can be powered by a standard 9-volt DC power supply with a 2.1mm negative center barrel. We always recommend pedal-specific, transformer-isolated wall-wart power supplies or multiple isolated-output supplies. Pedals will make extra noise if there is ripple or unclean power. Switching-type power supplies, daisy chains and non-pedal specific power supplies do not filter dirty power as well and let through unwanted noise. Do not run at higher voltages!