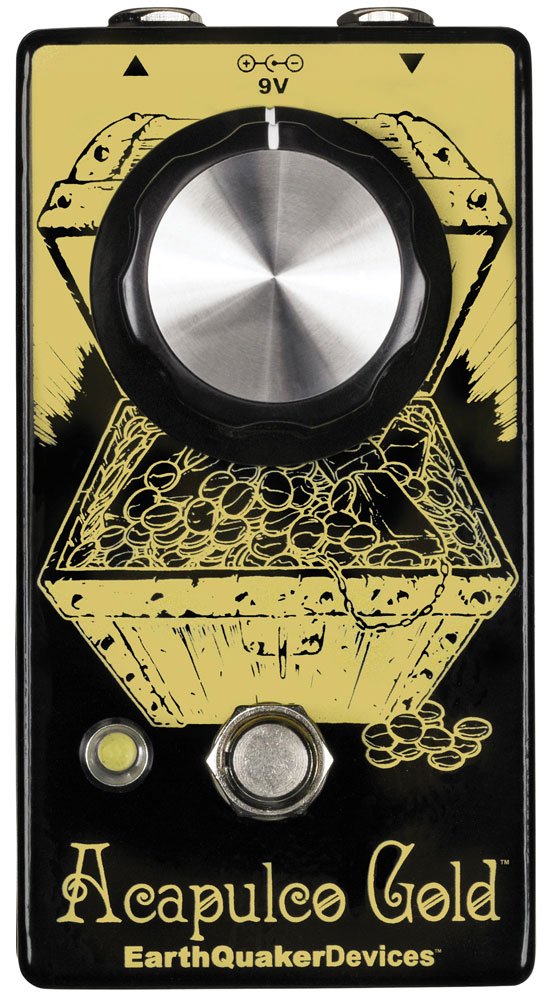 The Acapulco Gold was originally intended to be a limited release but, due to demand, we have decided to give it a face lift and add it to our permanent line up!

You know what's awesome? Simplicity. One button, one knob. How loud would you like it? Just move the knob. The Acapulco Gold is an original power-amp distortion circuit that's based on the sound of a cranked Sunn Model T. This is the spirit of rock and roll. Quit turning knobs and play that guitar like you mean it. With a dirt sound this good, any one second spent bending down and fiddling with knobs is one second too much. This is why the Acapulco Gold has one gigantic knob; move the thing and it gets louder or quieter. While playing, don't forget to fiddle with your guitar's volume and tone knobs, these can drastically affect the sound of the Acapulco Gold. The volume knob, especially, cleans the pedal up pretty well; not completely, this ain't your daddy's Fuzz Face. At minimum guitar-volume settings, the Gold imparts a hazy Nashville-sounding spank to your tone. At just-barely-backed-off, the Gold turns into a raunchy overdrive. Of course, when the guitar's knob is fully on, the Gold roars like a Model T on the verge of explosion. It's not-quite-fuzz, but so close. Each Acapulco Gold is hand-built by totally real people using premium components in Akron, Ohio, where the beer flows like wine.